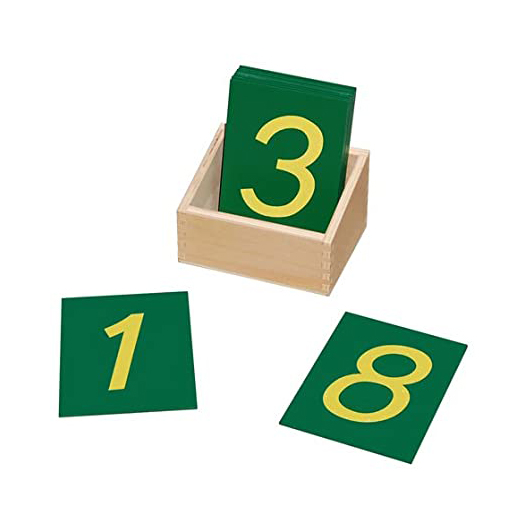 Send email to us

The Sandpaper Numerals introduce the child to symbol 0-9 and their corresponding number names. By tracing the numerals in the style and direction in which they are written, the child is preparing for writing numbers. The 10 rough sandpaper numerals are mounted on smooth green boards.

The Sandpaper Numbers are an important foundational Montessori mathematics material that introduce numerals 0 – 9 to young children.

Like other Montessori sandpaper materials, the Sandpaper Numbers are tactile, inviting the child to touch and experiment. The material is comprised of 10 green boards, each displaying a number on the front from 0 – 9, cut out of fine-grit sandpaper. It is often presented in a three period lesson to young children.

The direct purpose of the Sandpaper Numbers is to teach children the symbols that represent each number, allowing them to visually identify any number from 0 – 9. In Montessori education this is specifically taught separately to counting from 0 – 9, where children often fall back on rote memorisation.

Due to the tactile feel of the number cards, the material also prepares children for the writing of numerals, which can be used as an extension activity for the Sandpaper Numbers.

Children are introduced to the Sandpaper Numbers from three years of age. Work with this material is often followed by the Number Rods, which also introduces numbers 1 – 10, and the Spindle Box, which introduces the concept of zero.

Once the child is familiar with all numbers, including zero, you can introduce the concept of writing.

In a similar manner to Presentation 1, use a tray filled with sand to show the child how to write each number after you have traced it with your finger. Ensure you guide the child through mistakes, giving them time to retrace the Sandpaper Numbers if needed.